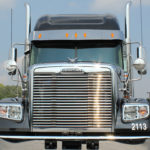 5 Things You May Not Know About Trucking

Do you think you know trucking? Lots of people just know what they’ve seen. Maybe that’s a few rigs on the highway, stories on the news, or maybe a romanticized truck-centric movie like Smokey and the Bandit. And that’s all right, but a little extra education never hurt anyone. So, let’s take a quick look at a few lesser-known facts about trucking – the backbone of the transportation industry. Unless you’re an experienced driver, you may find you know a little less than you think.

1. Trucking Moves America
About 70% of freight in the United States is moved by truck. That’s a ton – in fact, more than 10 billion tons in 2015 alone! That means just about everything you buy at the store or online is brought to you by a professional truck driver. The seat you’re sitting on, the phone at your fingertips, the sandwich you ate for lunch, and even your best friend’s second cousin’s shoes were more than likely on a truck at one point.

2. Truck Driving Creates Jobs
Obviously, drivers can earn some handsome benefits, but they aren’t the only ones getting ahead. Beyond the 3.5 million professionals in the cab, trucking more broadly fuels 7.3 million jobs across all industries. Those eighteen wheels aren’t the only things drivers keep rolling.

3. Big Rigs Pave the Way
Everyone knows the not-so-great feeling of discovering a new pothole or rough patch of highway. “No fun” is an understatement. But no worries – we’re on it. In 2014 alone, the trucking industry contributed nearly $40 billion dollars in federal and state highway taxes to fund projects that keep our byways smooth and safe.

4. We Are Efficient
There’s just no getting around it. A big, powerful truck is going to burn some fuel. But just because we’re driving doesn’t mean we aren’t keen to reduce our environmental impact. Most reductions we make (think fuel consumption and emissions) directly link to cost savings on our end. It’s a win-win.

If you don’t believe us, take a look around the highway. You’ll likely notice innovations like truck fins, a relatively simple modification that increases efficiency by as much as 15%. Electric rigs and advanced convoy techniques like platooning aren’t too far off either!

5. We’re Growing
Trucking isn’t going anywhere. While some stores may close their doors as they yield to online shopping, the underlying reality remains unchanged. You want something? You’ll need a professional driver to bring it to you. And if you need a job, you can become that guy. The American Trucking Associations predicts freight volume to grow by more than 3% over the next five years. With increased freight comes increased routes + increased opportunities to get behind the wheel.

If you happen to be a reliable and “driven” person, you might consider joining Smith’s elite team! Just send us an email at smith-recruiting@smithtransport.com, or give a recruiter a call at 866-265-3718. Check out our available jobs now.

And while you’re at it, don’t forget to follow Smith Transport on Facebook and Twitter and stay to our blog for more tips. We’ll see you around!